I had wanted to go to Tioman for a long time - ever since I was teaching in Jasin in the early 70s when a group of our teachers went. I could not go at that time because I was pregnant with Rizal and Repin would not let me go. Tioman is an island off the coast of Pahang but is easier to go from Mersing, in Johor.
The Repin family decided to go there in early September 2015, during the school holidays so that Rizal and his family could join us. Wan and Emma drove on their own from KL, Shasha came with us and Sarah and Neville went from Batu Pahat. We all converged in the town of Mersing and arrived there just before 12 pm. We had to wait for at least 2 hours for the ferry to Tioman. The journey was uneventful and took us about an hour. We arrived at the jetty by 4 pm and were taken to the Tioman Resort by a van. The resort itself was okay and our chalets were comfortable. Repin and me had a chalet a bit further from the others. The closest to us was Sarah and Neville; Wan and Emma was next to Shasha and Yati and Rizal's was in front of us.
We were in Tioman for 4 days and 3 nights and on the second day we took a cruise round the island as well as snorkeling. Well the kids went anyway - I was too scared to try. Sophie was fearless - snorkeling with all the adults. Even Shasha and Sarah went . I was a bit worried about Sarah because she was already 6 months pregnant at this time. But she wanted to try and did it for a while. 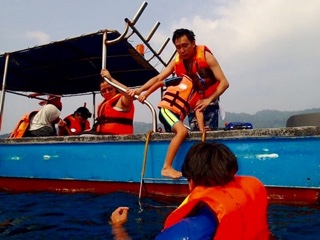 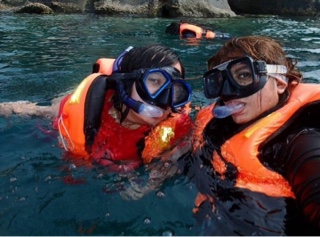 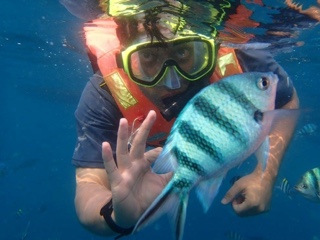 Wan and a fish underwater 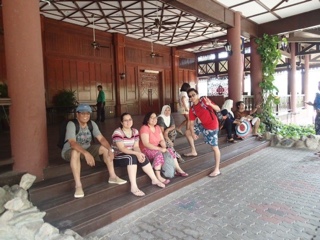 Above : waiting to go for the snorkeling trip 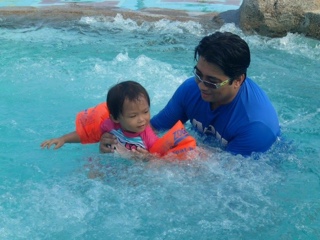 Above picture : Rizal and Rania in the pool
Posted by Kat at 21:21 No comments: Links to this post

It's more than a year now that Sarah has left us. The pain has not subsided, if it ever will. But life has to go on, especially now that we have her child to look after.  Looking after a tiny infant is not easy at our age, especially when the child is an orphan and has no mother to take over. After everything was over and Rizal as well as Wan and Emma had gone back to heir respective homes, Repin and myself were left with the baby so to say. Luckily for us Arissa is a fairly easy baby. In those early days she slept the whole time- nothing would wake her up. She didn't even cry for her milk - we had to wake her sometimes to get her to drink. Time flew and before we knew it she was already one month old, then she was 2 months and Repin and I had to go for our umrah.
Fortunately for us my sisters Sabariah and Jasmine came over to look after the baby while we were on our umrah. Neville was around too - he would come back during the weekend and so it was all well taken care of. 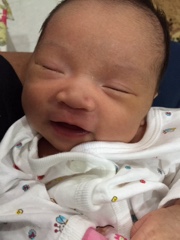 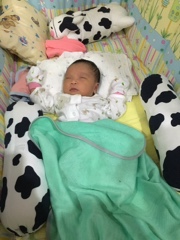 Arissa at one month 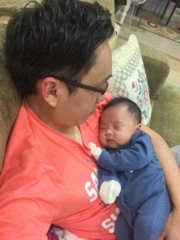 Neville and Arissa ( 2 months)
Our umrah was 12 days and while we were there we heard the sad news that my sister Laila, who had been in hospital since December 6 2015, had passed away. She had a brain tumor which was inoperable and finally after almost 2 months she too left us. Hardly 3 days after she died, another member of the Tahir clan, Imran, my nephew, had a bike accident. He too passed away that same day at the hospital.
It did seem as if the Tahir clan was being severely  tested by the Almighty Allah SWT.  Life as we knew it had changed so much.
Posted by Kat at 20:38 2 comments: Links to this post

I have not written in a while. But actually a lot of things have happened - some so horrible I could not write about them. My lovely daughter Maisarah has passed away. She was just 28 - just a few weeks after her 28th birthday which we celebrated in a small way in Telok Gong, because she was working the next day and Neville was not around. Now when I recall the events that led to her death I realise that my heart was filled with anxiety and dread though I did not know why. I assumed it was because I was going for my umrah in late November and she was already at the late stage in pregnancy. But I remember my heart was filled with dread about leaving her alone for 10 days. I was sure something bad would happen. In the the end we decided to postpone our umrah till February, after Sarah's confinement. Never did I imagine that the dread I felt was going to be real and I would lose my darling baby girl.
On 11 th December, a Friday , Sarah went for her usual checkup with Neville. The lady Doctor Dr Nor Azlina, said that her cervix was already open even though Sarah wasn't due yet for another 2 weeks. Sarah and the doctor agreed to check in at the hospital ( Mahkota Medical Centre) to prepare for her birth. She was so chirpy and excited as she went, calling out to me not to come too early. We went anyway, Repin and I at around 10 am but she was still in the birthing room. I hadn't realized that she was on a drip, but that drip was to induce labor. Why induce when she wasn't due yet? I didn' think to ask then.
Repin and I went next door to Parkson to buy some essential baby stuff and went back to Mahkota to wait. We hAd a light lunch because we were not really hungry. At 12.05 I got a text from Neville saying she had given birth to a 3 kg baby girl and we Could visit her. I went in and she was lying there looking a bit pale and tired. I stroked her hair and kissed her and asked how she was. Tired she said. Then when Neville went out for a while she looked at me and said "it's so painful Ma".
"I thought you asked for epidural? " I asked her. "I did, but it's still painful"
Neville came in and said , " She lost a lot of blood Ma". I nodded thinking it was the usual amount that most women lost during pregnancy, not knowing that she had lost too much blood too fast and she still hadn't been given a blood transfusion. Now thinking of all this, I wonder if things would be different if she had been given a blood transfusion immediately.
I went out and looked at the baby in the nursery. She looked so frail and tiny and the clothes looked too big on her. Then we went back to the waiting room and waited. Suddenly at 4pm Neville called to say that she had had a cardiac arrest. They had to do CPR on her and it seemed like hours. Then they took her to the operating theatre to check what was wrong. It seems they had to give her 10 pints of blood- she had lost so much that she went into cardiac shock. By 10 pm they came out to say that she was ok and she would be rested until the next day. The whole of Sunday she was unconscious, given a rest to recuperate, said the doctor.
Early Monday morning she woke up, with a sore throat and still blurry from the drugs they had pumped into her. But she was up! I sat with her and just held her, unable to believe that We had almost lost her on Saturday. The whole of Monday she was fine. She talked and wanted to see the baby so the doctor agreed to transfer her to a bedroom in the ward. That whole day she held the baby in her arms, nursed her for the first time  and even took pictures with Neville. These were the last pictures they would take together. 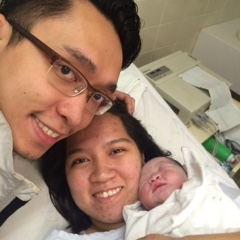 Looking at the picture who would have thought that she would slip quietly into a coma and leave us 10 days later?
Posted by Kat at 16:43 3 comments: Links to this post 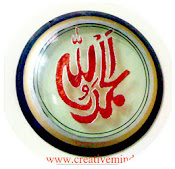 Yesterday was but a dream...

And tomorrow is only a vision


a dream of happiness

and every tomorrow a